The Birman Cat is easily one of the most popular cat breeds in the world. It has been for a good while too. It isn’t hard to see why either. After all, this cat is incredibly stunning. On this page, we want to introduce you to this beautiful cat. Hopefully, this will give you more of an idea as to whether this breed is the right one for you or, if you already own one, a few care tips.

Let’s start by talking about the Birman cat as a whole. Although, we must warn you, there is still a lot that we do not know about this breed, particularly when it comes to the origins of the cat.

History of the Breed 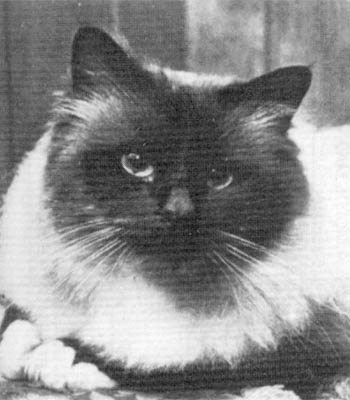 Unlike many other cat breeds, we do not actually have that much information about the origins of the Birman Cat. In fact, we have literally no information about where this breed originated from. A lot of people seem to believe that it originated in Burma (hence the name), but there isn’t really much evidence that this is the case.

What we do know about the breed, however, is that the first time it was ever really recognized as a cat breed was in France. In fact, the very first historical records that we have of the Birman Cat come from France. How it managed to get into France is anybody’s guess. There is a strong chance it was actually bred here, and somebody just came up with a story of how it originally came from Burma.

The Birman Cat isn’t even as old as some would have you believe. There are no historical records of the cat prior to 1920. This means that it likely started to appear a decade or so before that. This isn’t a breed that is hundreds of years old.

This is where things start to get interesting. You see, the Birman Cat that we know and love today may not be exactly the same as the Birman Cat from the 1920s. This is because the Birman Cat nearly died out during the Second World War. In fact, it was so close to extinction that we ended up with only two remaining Birman Cats. These had to be bred with other breeds of cat until something sort-of similar to the Birman appeared again. If you purchase a Birman Cat now, then it will have a connected to these two original cats.

Nowadays, the Birman Cat is an incredibly popular breed. This isn’t just in terms of being a pet either. Breeders are working exceedingly hard on enhancing the colors of the breed. You will also find that the Birman has gone into the creation of other breeds of cat. This includes the Ragdoll.

The Characteristics of the Birman Cat

Perhaps the most distinctive feature of the Birman Cat will be their coat. Their fur is going to be a medium length. However, unlike other breeds with a medium length fur, there will not be an undercoat. This means that they shed a lot less. It also means that you do not have a cat that has constantly matted fur. In fact, keeping the Birman Cat looking majestic will take a couple of brushes each week, if that.

These cats will be fairly chubby. Well, broad. Their face will be quite wide, often surrounded by a decent amount of hair. Their nose is classed as a ‘Roman Nose’.

This is a breed that is often shown at cat shows, and thus if you do have a beautiful specimen, then it may be worth entering them into competition. Although, do bear in mind that because the Birman Cat is such a popular breed, there are some pretty tough rules with regards to what constitutes a ‘perfect specimen’. So, you may want to look into cat breeder clubs in your country to discover what they are.

The Personality of the Birman Cat

For the most part, the Birman Cat is one of the friendliest breeds of cat that you can own. They seem to get along with absolutely everybody. Some may say that they are a little bit clingy, and they can be prone to separation anxiety. So, this is probably not going to be the ideal cat for you if you tend to leave cats alone for hours and hours on end.

The one major issue with their personality is that this cat can be a bit on the territorial side. This means that it will not be a fan of you introducing new cats to the household. Now, they will eventually get used to the new additions to the household, and they will be incredibly friendly once they are used to them, but it is still going to take a little bit of time for them to warm up. This means that you probably will not want to leave the Birman Cat unaccompanied with a new cat, at least until you can be sure that the two of them are going to be safe with one another.